The National Union of Ghana Students (NUGS), has on Thursday, 14 April, 2022 swore-in its executives for the 2022/2023 academic year. This was the 55th handing over ceremony to usher into office the 56th NUGS executives in pursuant to the Union’s Constitution Article 24 (e) (v)2019 as amended.

The lively event which took place at the National Theatre was doubled with NUGS awards night which recognised Ghanaian students across the length and breadth of the country for their service as such.

In the remarks of the newly sworn-in NUGS President, H.E Dennis Appiah Ampofo-Larbi, he reiterated many of his policies which he is committed to initiate in the interest of the over 10 million Ghanaian Students and further called on the Government of Ghana in that regard.

“I am happy that we can represent every single student of this country through spirited advocacy and initiatives that will touch everyone regardless of your background, your institution, your religion, class or social status in life. I am happy that we can build an application system, our famous NUGS app that we hope to be a transforming point in building a union that will be united more than ever. I’m happy that together we can initiate the NUGS special projects that will be a symbol of our commitment to building the educational foundation of this country.” as said by H.E Dennis Appiah Ampofo Larbi.

He further called on the Government of Ghana to see this new dawn as a partner in this regard; a partner that provides and suggests alternatives in ensuring that the cost financing scheme of our educational sector does not outweigh our students among many others.

Present at this program were the Deputy Spokesperson for the Ministry of Education, Yaw Opoku Mensah, Former NUGS President and Rep from the Ghana Publishing Company, Sammy Binfoh, the DCE for Amansie South, Hon. Clement Opoku Gyamfi together with other Alumni of NUGS. 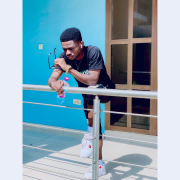